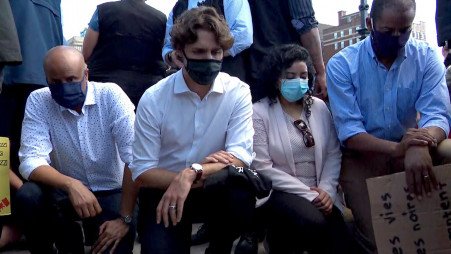 Conversely, in socialist and communist societies, the ruling government decide what social developments are publicly exposed, and which are not.

It is within this dynamic that CAP point out what CBC, CTV, Globe & Mail and other mainstream media outlets have not revealed:

The “merging” of Professional Sports– NBA, NFL, MLB, NHL— with “race-based” politics. For the first time in history, Pro Sports has “gone political.” And not just any form of politics has now entered the sports arena. Specifically, it is the most controversial form of all– racial politics.

Degree of focus from Canadian, as well as American media upon this unique social development? NOTHING–not one darn word.

Why? If the truth of the matter has not been revealed, how will any form of response be provided? Quick answer– it won’t be–therefore, it is up to fringe players like CAP to provide insight:

The integration of Black Lives Matter with Pro Sports is a GIANT development–and here’s why:

Within socialist and communist societies, politics permeates ALL aspects of society. Or at the very least, the non-political areas government wish to permeate.

On a side-note, CAP recently went to shop for clothes. It turned out the store is also a vehicle for the promotion of Black Lives Matter. Okay, so that’s Pro Sports–plus the retail clothing industry.

Here we witness incremental steps toward politics being infused into all elements of society. Within Canada, this is a move toward an establishment of a communist society.

Why are media silent about this? Since they are, they must be on board with the agenda. This makes for some seriously potent propaganda campaigns. Government, Media, professional sports, retail industry are today on board with an agenda which, in truth, is accurately described as “reverse racist.”

Does a “target” exist for the collective vitriol of these forces? Darn right it does– yet another aspect obscured by establishment media.The targets are North America’s white, caucasian, Anglophone peoples.

Seems a coagulation of politically correct entities are in 2020 morphing into a singular global force. Suddenly, BLM and geo-political Islam have become “blood brothers.” Pro Sports is BLM, and BLM is the NFL.

For CAP, it is within this race-oriented integration that a coming social chaos is to be found. It’s an epic battle of sorts, which due to media obfuscation, is not being properly understood by general society.

Will a  veritable “Us Against Them” social dynamic result in the end game globalist powers desire? Is this, in fact, a form of “post-modern” warfare? CAP say that an answer to this question is found in a basic understanding of Marxist political ideology.

Marxist ideology is the foundation of communist governance.  Politics permeating all aspects of society is a foundation for a socialist dictatorship. Putting all this together, the destiny of Canada can be understood in no uncertain terms.

If Canadian media were not hiding this reality from 38 million Canadians,  our citizenship would comprehend the pending death of democracy in Canada.