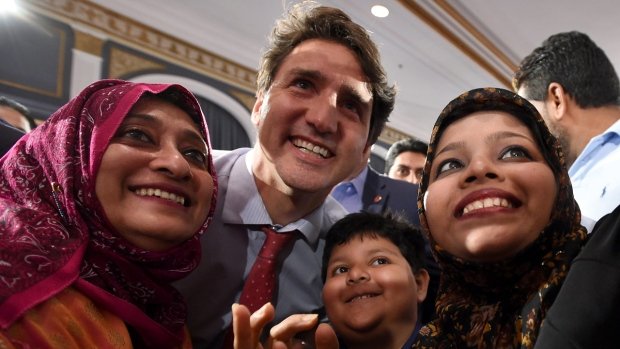 CAP write often on the theme of establishment media obfuscation of Canada’s foreign aid agenda. Here is a prime example:

“A lot of government money – $5.7 billion worth – gets spent on foreign aid every year.  Otherwise, Canada will continue to follow into the old trap, where foreign aid transfers money from poor people in rich countries, to rich people in poor countries.”

How “Justin Trudeau” is this is. Yet, to be reasonable, this international program of financial failure began long before Justin came along to trans-form Canada from democracy to dictatorship. Rather, it is Canada’s affiliation with the United Nations  decades ago which began this economic debacle.

The massive “foreign aid industry” of government bureaucrats, NGO workers and local officials who have made careers out of aid funding will certainly say this funding is effective.  But there has been a growing consensus in recent years that while foreign aid is well intentioned, it has had little to no impact on the countries it seeks to help.

Interestingly, a massive study of 6000 individuals receiving direct foreign aid in developing countries found that while they appreciate the assistance, the aid has made “no impact improving their lives.”

How fascinating. So why would this infrastructure remain in place if the billions are entirely ineffective? Is this not the odd-ball situation of the century? Enter Canadian media, stage right. Their role is to cover-up the injustice, abuse and exploitation on behalf of government. They do one heck of a good job. CAP has followed these issues consistently over time, and can count on one hand the number of articles on this situation covered by Canadian media.

Here is one: “Billions of dollars in Western foreign aid to Afghanistan, including from Canada, has been lost to widespread waste, lax oversight and endemic corruption, a U.S. watchdog agency says.”

Ouch! What incredible commentary on the corrupt state-of-affairs regarding foreign aid to the Islamic nation of Afghanistan.

More Madness: Unlike the United States, Canada does not independently audit the money it puts into Western trust funds for international aid. But Mr. Sopko said he is certain the problems he identified for U.S. taxpayers are the same for Canadian taxpayers.

Talk about a trusting government. Please do tell, fellow patriots–if you were prime minister, would you choose a “hand-shake,” no-questions-asked policy regarding the effectiveness of billions of dollars handed to Afghanistan, Iraq, Syria, Somalia and Iran?

What moronic idiocy, eh? But this appears to be exactly the manner in which Trudeau and previous PM’s have handled this situation.

“Here at the Canadian Taxpayers Federation, our supporters often seek clarification from us on the truth regarding claims of outrageous government spending. One email that gets passed into our inbox at least once a month is entitled “$15 billion given to foreign countries?”

Yes–billions which are ineffective, and more than likely rarely make it to their intended destination. Remember that ground-breaking CBC documentary which exposed these realities to 37.5 million Canadians? Neither does CAP–because this wouldn’t occur in a million light years by way of government media-puppets.

“Our findings are that basically the World Bank did not know how the money was being spent and …even the Afghans were saying some of the programs were really stupid, but there was no way to stop them,” Mr. Sopko said.

Stop The Press: “No way to stop them?”

Why not? CAP response: we do not know. But regardless of this, it is more than apparent this massive waste of money remains in place despite being shot-through with mismanagement and massive corruption. Yet, the program keeps on rolling regardless.

How “liberal-globalist” is this? Only 100%. Sound to you as if the agenda is written in stone, and immutable? It does for CAP— a sure-fire sign of  Trudeau string-pulling globalist destroyers in action.

Just think what these billions would do for Canada if re-directed toward domestic spending within our borders.  Is, or is not, this kind of money sufficient to trans-form our nation into a global powerhouse?

How about creating municipal funding to relieve gridlock within our major cities? How about a resolution to poisoned water on First Nation reserves. Perhaps a couple million to provide housing for Canada’s homeless.

Increase in pension funds for veterans? Eliminating child poverty would be nice. Of course, Justin Trudeau is working to end child poverty–in African and Islamic Nations— just not in Canada.

Fact is, our nation would be entirely transformed for the better if even 50% of these billions went toward internal, domestic issues within our fading “Great White North.”

So why doesn’t Justin Trudeau re-direct a portion of this funding–or ideally — all of it?

Does this man actually prefer that lower and middle income Canadians remain as they are? Why on earth would our government waste billions on Third World nations while maintaining a financial status quo for a major portion of Canadian citizens?

Of course, King Justin has not maintained a tax-oriented status quo for middle income Canadians. His carbon tax directly negates this theory.

Project Garbage Can: “The Wasting Of Billions of Canadian Tax-Payer Dollars By Way of Trans-fering The Funds to Middle Eastern and African Nations.”

Nice headline, eh? Remember this Toronto Star article from October, 2019? Neither do CAP— because it doesn’t exist. Rather telling, no?

Not a newsworthy story? A benign, “vanilla-flavoured” pile of nothingness–right Mr. CBC? Oh,Canada–you have been hoodwinked-– and this has been going on for decades without the people of Canada understanding the truth of the matter.