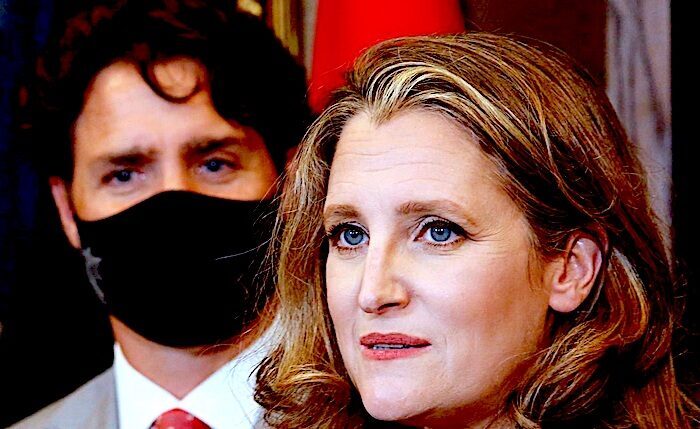 According to Politico, Ms. Freeland said that “the response by Canada and our allies will be swift and it will bite. This barbaric attack cannot and will not be allowed to succeed.” Freeland was born in Canada to Ukrainian parents — in fact, her mother helped draft Ukraine’s constitution.

The Deputy Prime Minister has lived in Russia, and speaks Russian, Ukrainian, French and Italian.  While Freeland has spent time in Russia, it is doubtful she will return any time soon. Turns out that she was banned from entering the country.

“When the West levied penalties against Moscow[in 2014] for its invasion of Crimea and eastern Ukraine, Freeland herself, then just an opposition member of Parliament, was slapped with a retaliatory Russian travel ban.”

Since this time, Ms. Freeland has been consolidating power like a political banshee. Taking over as Finance Minister from a disgraced Bill Morneau, she recently unleashed her wrath upon working class Canadians. As part of the Emergencies Act— or as some argue– the reason for its invocation, Freeland gained an ability to freeze the bank accounts of those involved in the Freedom Convoy to Ottawa.

She has now hit the big leagues. Effective immediately, Canadian financial institutions are prohibited from engaging in transactions with the Russian Central Bank, Deputy Prime Minister and Finance Minister Chrystia Freeland has announced.

“Sanctioning the Russian Central Bank is an unprecedented step, as it is the first time a central bank of a G20 country has been sanctioned in this way,” according to the Finance Department.

This CAP believe– what isn’t unprecedented when it comes to our post-modern Liberal government? Our focus transcends moral implications in terms of the Russian- Ukrainian conflict. We speak of the corridors of power within Canada. In this we recognize replication of Trudeau-brand “democracy.”

Chrystia Freeland is transitioning to a female Justin Trudeau. The implication is profound–  meaning that Freeland is being groomed to take Trudeau’s place. Smart money says not to be fooled by Ms. Freeland’s seemingly mousy ways. Her voice and stature belie her grooming to become the next Liberal dictator of Canada.

Let us compare mythologies– better known as realities. Trudeau and Freeland are disciples of trans-nationalist politics. Both are members of the World Economic Forum. Ms. Freeland has interviewed globalist banker George Soros. Trudeau has met with WEF founder Klaus Schwab.

In other words, from an ideological point-of-view, Trudeau is Freeland, and Freeland is Trudeau. To swap out leaders changes nothing. In this capacity, CAP make the claim that Canada is controlled by a very real and powerful Liberal Dictatorship.

Leaders come and go, and it is possible this will occur for three-term victor Justin Trudeau. Yet, behind the scenes, little to nothing is going to change. Thus, we stumble upon the truth regarding federal politics in Canada. Whoever is Liberal party leader will become prime minister.

Taking the process a step further, we recognize an ominous condition. The Canadian public no longer decide who is leader of our country. The function has been whittled down to whomever Liberal Party members select as party leader.

The rest is little more than a media exercise. The role of the press is simplistic in nature: to convince the people of Canada that our country is a functioning democracy. Other than the Liberals, there is one contender with potential to form a federal government. It is the Conservative Party. You know the one– it’s the party that media never stop trashing for a micro-second.

The Liberal government pay media to do so. As a result of this and other nefarious activities, Canada has transitioned to a pseudo-democracy. Is the tyranny of Justin Trudeau going to transition to “Czarina of Frozen Bank Accounts” Chrystia Freeland? After our PM’s performance in the recent Truckers Convoy, it only makes sense.

4 thoughts on “Banned From Entering Russia, Chrystia Freeland Is The Obvious Successor To Trudeau”