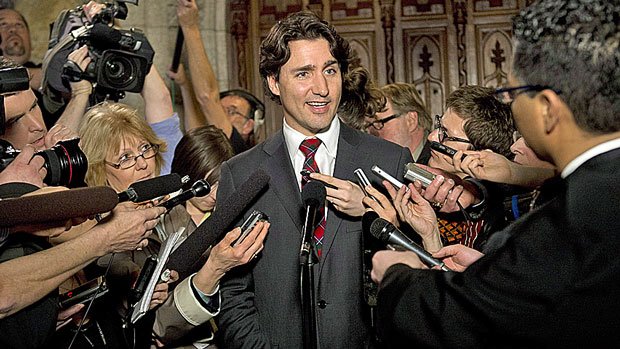 A commotion broke out during a climate change strike in Montreal after a man reportedly attempted to lob eggs at Liberal Party Leader Justin Trudeau.

As thousands marched down the street on Friday, Trudeau’s security detail pounced on a man in the Liberal leader’s vicinity. Video footage shows Trudeau, who attended the climate strike with his wife and children, marching in the large crowd and waving at people.  At one point Trudeau seems to reach out to someone in the crowd. About a second later his security detail jumped on a man and brought him to the ground.

Welcome to Sunny Ways Canada! Yes or no–Canada’s political environment has never been at a boiling point such as we are now experiencing under the rule of ersatz dictator, Justin Trudeau.

Speaking personally, I have followed issues related to this nature for nearly four decades. Never have I seen such vitriolic hatred of a Canadian prime minister like this. Anger, eggs, protests, truck convoys, physical threats, hate-filled emails, social media uproar, accusations of racism, bigotry and the rest.  You name an area of social relations as related to immigration, multiculturalism, refugees et al, and CAP will show you how much worse relations are under King Justin of Canada.

Ho many times have Canadians read about the strong-arm tactics of Trudeau’s Liberal KGB-style protectors. In Quebec, a little old gray-haired lady got thrown to the ground by Justin’s muscle-heads. Her crime? She asked Canada’s King of Kings a questionn about the cost of illegal border-jumpers.

“Racist!” claimed our PM. What was racist about her questions and statements? Nothing at all. The lady did not reference race, ethnicity or religion. Her comments did not qualify as racist according to Canadian law.Does this make a difference to Justin Timber-flake? Not in the least. Under Trudeau’s reign, racism is anything he wants it to be.

CAP Question Time: When considering the governments of western nations of modern history, which form of governance most often results in public anger, violence and rebellion–democratic, or totalitarian nations?

Consider one of the Trudeau family’s favourite nations–China. As many will know, millions upon million of Chinese nationals have died and/or suffered under the communist regime. Trudeau family-hero, Mao Tse Tung, had millions murdered in a series of revolutions, as well as the Tianimmen Square rebellions.

Number of dead Canadians resulting from public rebellion? The FLQ knocked off a few souls in Quebec during Pierre Trudeau’s time in office. But in no way can one compare Canada to China in this regard- it would be an absurdity.

Point being, the more totalitarian the government, the greater the degree of public consternation. Moving forward logically, we can safety state so-called “rebellion” is at its high point in modern Canadian history.

Why? Because Canada is more of a totalitarian state than ever before in history. This is the dynamic Justin Trudeau, Gerald Butts and butcher-boy Immigration Minister, MP Ahmed Hussen, have delivered to Canadian society

Don’t like citizenship for terrorists? Too bad--Hussen likes it, and therefore it moves forward. Disagree with an increase in federal migration quotas? The majority feel this way, while King Trudeau increases the quota by 30%. Getting the picture?

How do you like your democracy–dead on arrival? Some do. Trudeau, Butts, Hussen, Khalid, as well as the United Nations, China, Islam and other nefarious global forces working to steal Canada away from its peoples, its values and historical identity.

Let’s be perfectly clear. Trudeau says “Diversity is Canada’s Strength.” Is the egg-equipped Trudeau protestor emblematic of such a thing? How about the grey-haired granny with her face in the dirt at a public event where Trudeau spoke?

Is Andrew Scheer the saviour of our people? CAP doubt this very much. Jagmeet Singh? Please! The only federal party leader who speaks even a semblance of what CAP preach is Maxime Bernier, leader of the nascent PPC party.

He’s not going to win, and nor is Mr. Singh. Truth is, Anglophone Canada is in a highly precarious position within our society. Of course, you will never hear of this from Anglophone journalists such as Andrew Coyne, Christine Blatchford, John Ivison and John Ibbitson.

Seems these Old Stock Canadians have not a care in the world for the fate of their own people. Meanwhile, they appear to care about Islam a whole lot. How strange.

Justin Trudeau is an overgrown trouble-maker. Patriots, take heed– notice how no matter what trans-pires regarding these issues, the globalist multicult-mongers always stick with the same response.

“Canadians must become more educated. We need to better understand Islamic ways. Canadians are meathead-like imbeciles who must broaden their horizons to understand that their cultural identity is secondary to that of the Third World.”

This is the way the globalists roll–insulting, arrogant, superior. Then, the multicult-mongers inform us that it is we– white Canadians– who have the privilege of white supremacy.

What a sham. Then again, that’s all we are going to get from a government led by Justin Trudeau–the biggest fruitcake ever to enter the political arena in Canada.