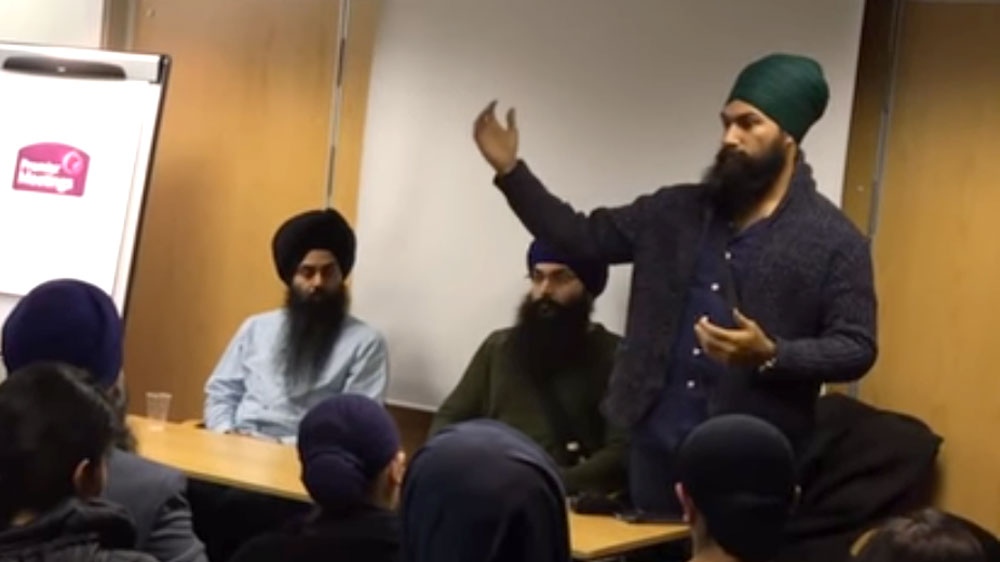 On 23 June 1985, Air India Flight 182 disintegrated in mid-air en route from Montreal to London over the Atlantic Ocean, as a result of the explosion from a bomb allegedly planted by Canadian Sikh militants.

The remnants of the airliner fell into the ocean 190 kilometres west-southwest of the southwest tip of Ireland, killing all aboard: 329 people, including 268 Canadians, 27 British citizens and 24 Indian citizens.

The bombing of Air India Flight 182 is the largest mass killing in Canadian history. It is Canada’s worst terrorist attack, and the world’s deadliest act of aviation terrorism previous to the World Trade Centre attacks in 2001.

Within hours, Canada’s Indian community was the focus of attention among talk that officials were investigating connections to the Sikh separatists working to establish an independent state in India. The Khalistan movement is a Sikh separatist movement seeking to create a homeland for Sikhs by establishing a sovereign state called Khālistān in the Punjab region. The proposed state would consist of land that currently forms Punjab, India and Punjab, Pakistan.

The main suspects in the bombing were members of a Khalistani group called the Babbar Khalsa. The group had been officially labelled a terrorist organization, and were banned throughout Europe, as well as in the United States.

The trial of two of the accused— the third got five years for perjury—  took place between April 2003 and December 2004. On 16 March 2005, Justice Ian Josephson found the two accused not guilty on all counts.

329 people died– and so did the story. 268 of them were Canadians of Indian heritage. What makes Sikhism in Canada so special that it can withstand such circumstances? It was, after all, one of the greatest mass murders in modern history. Within contemporary Canada, it barely stands as a footnote.

The Quebec City mosque shooting was a terrorist attack by 27-year-old Alexandre Bissonnette on the evening of January 29, 2017, at the Islamic Cultural Centre in Quebec City. Six Muslim-Canadians were killed and five others seriously injured after evening prayers when Bissonnette entered the prayer hall shortly before 8:00 pm and opened fire.

The 27-year-old pleaded guilty to six counts of first degree murder and six counts of attempted murder. On February 8, 2019, Bissonnette was sentenced to life in prison, with no possibility of parole for 40 years.

In January 2022, the fifth official commemoration ceremony for the deceased was held in partnership with Muslim Awareness Week.

“On the fifth anniversary of this tragedy, we also mark the first National Day of Remembrance of the Quebec City Mosque Attack and Action against Islamophobia. Today, we pay tribute to the victims of this hateful act of terror, who were senselessly killed at the hands of bigotry, Islamophobia, and racism.”

What a difference in circumstances. A white Francophone is convicted of killing six Muslims, and sent to jail for a minimum of 40 years. Two Sikh-Canadians are charged with 329 counts of first-degree murder, and the accused are set free because the “evidence was inadequate.”

In his verdict, Justice Ian Josephson cited “unacceptable negligence” by CSIS when hundreds of wiretaps of the suspects and other informants were destroyed. Of the 210 wiretaps that were recorded, 156 were erased. The tapes continued to be erased even after the terrorists had become the primary suspects in the bombing.

“Because the original wiretap records were erased, they were inadmissible as evidence in court. CSIS claimed the wiretap recordings contained no relevant information.”

On 1 May 2006, Crown-in-Council, on the advice of Prime Minister Stephen Harper, announced the launch of a full public inquiry into the bombing and subsequent investigation, as well as to identify gaps in Canada’s security and intelligence system.

In 2022, the Air India bombing barely registers on the richter scale. Sikh-Canadians are the most over-represented community in Canadian politics. Leader of the New Democratic Party Jagmeet Singh, described by OpIndia media:

In 2014, the Indian government denied Jagmeet Singh a visa to visit India. The Indian government accused him of misusing the human rights cause to pursue his “insidious agenda of disturbing the social fabric of India and undermining the peace, harmony and territorial integrity of India”. Singh became the first western legislator ever to be denied entry into the country.

In June of 2015, Jagmeet Singh appeared on stage at a Khalistan rally in San Francisco featuring a large poster of Jarnail Singh Bhindranwale, a Khalistani terrorist who led an armed movement against India.

In 2016, the NDP Party Leader participated in a pro-Khalistani seminar and “even endorsed the use of political violence as a legitimate form of resistance” to achieve an independent Sikh homeland in India.”

Here we are in 2022, as Jagmeet Singh, leader of the NDP, signs an agreement to lock-in his Liberal competitor Justin Trudeau in order for him to complete a 10-year term as prime minister.

Representing less than 1% of the population of our country, Canada’s Sikh-Canadian community are privileged like no other. No one seems to know why, or how, this came to be.

— With files from Wikipedia, OpIndia Media.