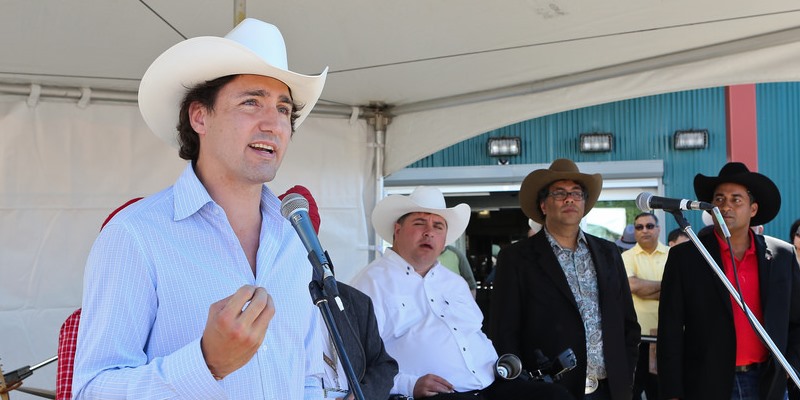 “The anger over the Trudeau government’s plan to have farmers use less fertilizer hasn’t boiled over in this country like it has across the Netherlands, but it’s getting there.”

So states an article recently published in the Toronto Sun. When considering broader context of the war against carbon emissions, CAP arrive at an intriguing hypothesis:

With carbon reduction as rationalization, Justin Trudeau wields the power to control our national destiny. In the name of fossil fuel emissions, our Liberal government has the ability to destroy segments of our economy, and indeed entire industries.

The obvious category being Oil Sands production in Alberta. In the name of Covid, Canada’s trucking industry took a giant spill. Next on the agenda is an attack on Canadian farmers. Leveraging  climate change concern, government are pushing for reductions in emissions of nitrous oxide from fertilizers.

Farmers claim government’s moves will cause “severe economic harm, including billions lost.” The Western Canadian Wheat Growers has released a report stating the plan would cost Alberta $2.95B, Saskatchewan $4.61B and Manitoba $1.58B in lost production from canola and spring wheat crops alone.

Target: Alberta, Saskatchewan, Manitoba. Western Canada— heartland of Conservatism. In the name of the climate change, Justin Trudeau has the power to transform our nation into anything the Liberal government so chose.

“Across the Netherlands, the move by the Rutte government to impose a 50% cut has seen farmers protest over the last two weeks with highway blockades. Based on a policy Trudeau may soon inflict upon Canada, Dutch farmers are blocking supermarket entry and food distribution centres.”

Oil Production. Truckers. Farmers. Witness as government indulges in attack upon specific segments of our economy. The common thread? All are comprised of working class, “Old Stock” citizens–the bulk of which are male.

Coincidence? Are these Canadians not the bane of PM Trudeau’s existence? Do they not function as his greatest nemesis in terms of push-back against his quasi-dictatorship?

Cultural Action Party maintain that duplicity lies at the heart of Trudeau’s woke revolution. The fork of the attack is two-pronged. On the one hand is a program of cultural degeneration. On the other, an assault on economy.

On a strategic basis, part one is pretty much in the bag. Unified in process, government, media and academia have established a culturally vulnerable, self-loathing society. Next up, economic sabotage utilizing carbon emissions as its foundation.

To ravage society in both areas is fulfillment of an agenda for national transformation. With the U.N., World Economic Forum and World Health Organization as ground zero, the plan is to transition Canada from democracy to dictatorship. As a strategic component, Old Stock Canadians are transferred to a powerless outsider community.

These stiff-necked Canucks must be dealt with. All social revolutions include a vilified community. To exacerbate the process, propaganda campaigns have been established. Together, government and media transform the target community into that which general society can hold responsible for all social problems.

CAP wonder if these things ring a bell for readers. Fascist governments of the mid-20th century may well qualify as innovators in the field. Carefully constructed media propaganda campaigns against vilified communities paved the way toward success.

“Farmers across the Netherlands are protesting rules that will require them to reduce nitrous oxide emissions by 50% by 2030. It’s a move to reduce greenhouse gas emissions but also one that could see them lose money, have lower crop yields or force some farms to close for good.”

“In Canada, the Trudeau government is moving forward with a plan to reduce emissions from fertilizer by 30%.”

Woe unto the working class. Are middle class Canadians about to meet their destiny as they transition to poor Canadians?

As concerned patriots, time as come to align our collective thinking. If Justin Trudeau so wishes, he can destroy Canada’s middle class. Record-high inflation is in place. Personal debt is at an all-time high. Average-income citizens cannot afford to buy a home. Just last week, 9 million Canadians confessed that their hopes of home ownership have dissipated.

Alberta’s oil industry is being superseded by Saudi Arabian oil. Next up, decimation of livelihood for Canadian farmers. Media say nothing. Sure, they may reference this or that element in sporadic fashion. But never will they put the big picture together for Canadians to fully comprehend. They must want the same things government want.

Based on sanctions against Russia, the Liberals have raised nitrate fertilizer to unheard-of proportions:

“Fertilizer suppliers and retailers are scrambling to sort out the impact of the Canadian government’s sanctions on fertilizer from Russia and Belarus. Fertilizer has historically been one of Canada’s largest imports from Russia.”

Surely some can see the signs along the pathway of Canada’s destiny as directed by Justin Trudeau. CAP believe general society will come to understand the agena. At what point in the future will it be?

Canada’s days as a democratic nation are numbered. All it may take to usher in a communist Canada is an economic crash. The globalist goal may be post-modern, but the schematic is not. Decades of strategic planning has primed the wheel for democracy to be driven toward a dictatorship.