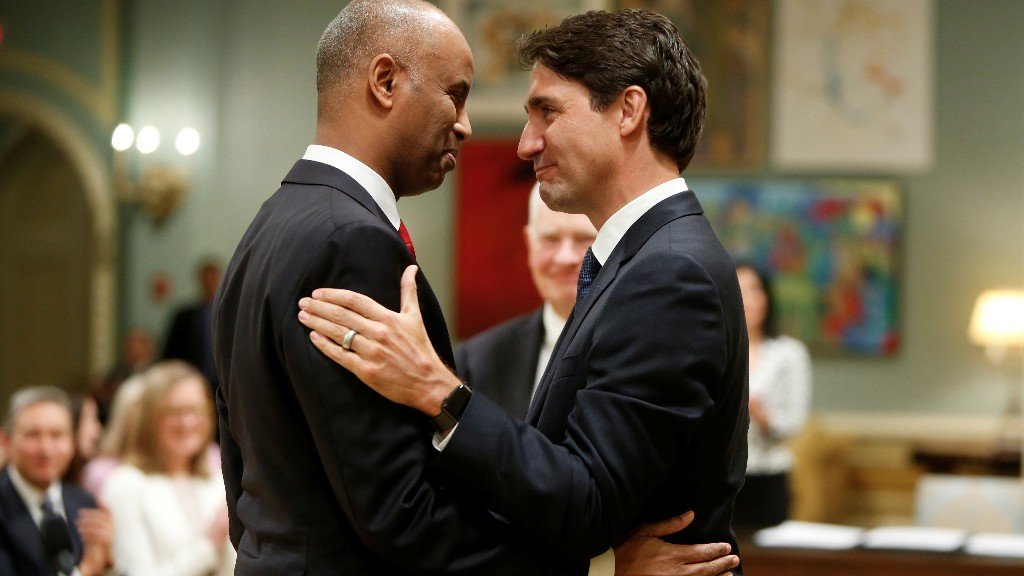 A Sudanese immigrant man charged with killing a Red Deer doctor at a walk-in clinic told a judge Wednesday he is ill and “doesn’t recall details about the attack.”

“Deng Mabiour spoke to the court by telephone from his cell at the Red Deer Remand Centre, where he is being held in quarantine due to the pandemic.”

“Pressed by the judge, Mabiour said, “I didn’t remember everything because I’m sick. I need a doctor.” He then laughed.”

Any other Canadian patriots recall the term “the best and the brightest?”  Let CAP apply this to how both PM Justin Trudeau, as well as his Somalian side kick ex-Immigration Minister, MP Ahmed Hussen, feel about immigrants and refugees from the 3rd World.

“Pure gold” might be the refrain from King Justin. “The future of Canada,” bellows MP Ahmed Hussen–half-citizen of Somalia.

Now, apply this sentitment to the Sudanese migrant. He is in isolation regarding Covid-19. He is “mentally ill”–of course– what murdering migrant isn’t? . He is accused of murder. If true, then the Sudanese man has created massive consternation among the residents of Red Deer, Alberta.

Seems all Trudeau’s “Man from Sudan” has brought to Canada can be melted down to a single word: TROUBLE.

Message from CAP and Canadian patriots to GTA 3rd World Globalist Power-Player, MP Ahmed Hussen: Canada does not want the dregs of the planet imported into Canada for the purpose of murdering an innocent white Canadian doctor.

It is not as if this is an isolated case. In 2017, Calgary police have charged a man in the violent death of a young Sudanese refugee.

“Bak Malok, 20, was stabbed and beaten with a baseball bat Thursday outside a northeast bar. He was rushed to hospital but eventually died.”

In 2016, Calgary police charged three men with first degree murder in connection with a murder in Forest Lawn early Friday morning. The family came to Canada from South Sudan in 1997. “We ran from the war,” she says.” We don’t want to start a war in Canada.”

Good news–the Sudanese don’t want to start a war in Canada. In CAP’s opinion, this sentiment is antithetical to the attitudes of Trudeau and Hussen.

CAP believe a war of sorts already exists in Canada. It works like this:

The ruling government of Justin Trudeau and the Liberals— in partnership with CBC, CTV and establishment media– are waging a war against Canadians of European Heritage.

Within this confrontation, government and media exclusively support 3rd World communities. Their job is to import, settle, finance and empower migrants from China, Iran, Somalia, Pakistan, India and Nigeria, while running down Anglophone Canada.

This is why the story of the Sudanese is not actually CONDEMNED by mainstream media. Let’s face it –the accused is what may be referred to colloquially as a “waste of space.”

Do media suggest the miscreant  be shipped back to Sudan? Nope. Within this CBC source article, do you see one example of condemnation of:

Immigration policy, refugee policy, 3rd World immigration, Sudan, or murder in general? Not at all. Why? Because CBC work for Justin Trudeau and Somalian-citizen MP Ahmed Hussen–not on behalf of 25 Million Canadian-born citizens.

Now, the bad news: this is your Canada, fellow patriots–a land where African migration is more important the murder of a white family doctor.

And what, pray-tell, does the CBC have to say about a hate crime charge? Why, the very same thing as Mr. Trudeau and Mr. Hussen—nothing at all. Talk about a double-standard, eh?

Turns out that within Justin’s “post-modern” Canada, hate crimes are strictly a one-way street. If, for example, when a white man tears the hijab off the head of a Muslima girl, this is a “hate crime” according to society.

But when a dim-witted Sudanese man murders a white doctor, this is not a hate crime. What gives, fellow Canucks? Simple as pie–this is 2020 Canadian society. Seems that in  “no core identity” Canada, as long as a citizens core is originally found in Sudan, Somalia, Pakistan, Iran or India, then according to government, you are the “apple of government/media’s eye”

On the other hand, if said individual is of the “Old Stock” variety— they are simply “rotten to the core.”