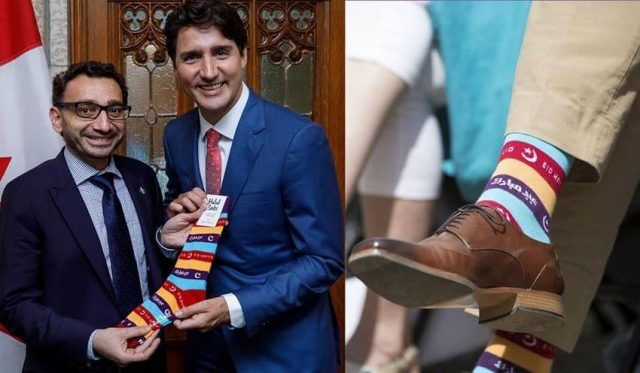 In the wake of the deaths of 63 Iran-Canadian passport holders, Prime Minister Justin Trudeau proclaims there are “no good options” in the matter.

CAP vehemently disagree: Good Option #1–Condemn in no uncertain terms the behaviour of the Iranian government. Yet, even something as basic as this is beyond the pale for Justin Trudeau.

Canadian patriots would like to understand why. After all, if 63 dead citizens does not motivate Mr. Trudeau to speak out against the government of Iran--not to mention Islamic terrorism in general, what will?

Quick Answer: Nothing at all. Simply stated, Justin Trudeau appears entirely incapable of saying one negative thing about any element of Islam. Sharia Law? Nope. Female Genital Mutilation? No. ISIS itself– not a direct comment. Islamic militancy and terrorism– silent as the lambs.

Then we have PM Justin Trudeau himself. It appears all these characters are cut from the same cloth: people who elevate the Nation of Islam above the Nation of Canada.

CAP are thinking this applies to the prime minister of Canada– a self-professed Canadian Christian. But does Justin’s behaviour suggest he is, in fact, a true Christian-Canadian?

Please–do not make CAP cough into our Tim Horton’s coffee cups. By way of his words and behaviours, Trudeau is 100% dedicated to the Nation of Islam. All true Muslims are.

CAP has combed through dozens and dozens of media articles which include Trudeau’s commentary on the 63 dead people. Not one of them includes any degree of condemnation of the Iranian government.

So who then is Justin Trudeau working for? As CAP have stated incessantly, we believe Justin works for the following entities:

— United Nations. Canada is responsible for the Third World refugees which are not the responsibility of the nations where these refugees actually reside — Syria, Afghanistan, Somalia, et al.

This is because Canada so foolishly signed the U.N. International Refugee Pact in 1951. Syria, Saudi Arabia, Iran and the rest did not sign–hence they are not responsible for their own refugees. Turns out that this is, in fact, the responsibility of millions of Canadian tax-payers--and Justin Trudeau is down with the whole sordid affair.

Additionally–and obviously–Justin Trudeau works on behalf Sikh Nationalism, the Punjab, as well as the Nation of Islam. Another major player– international banking via billionaire George Soros’ “Open Society Foundation.” As the name implies, this population-manipulating “non-profit” promotes the theory of open borders.

Trudeau adheres to open border policy. This we can confirm by way of Justin’s “tweet which changed a nation” — messaging the world that illegal 3rd World refugees are welcome to crash the Canadian border and live off welfare checks financed by regular Canadian workers.

An absolute “litany of woe”– while CBC and mainstream media hide these truisms from the people of Canada. Here’s an additional truism for Canadian media and their lie-beral snowflake followers:

Justin Trudeau should be an ex-prime minister of Canada. Frankly, CAP believe “everyone knows this”— but there he is up on the podium, telling Canadians everything except the statement any reasonable prime minister would make upon hearing that 63 citizens have been killed in an Islamic-related event:

“The Canadian government and its citizenship hereby CONDEMN the behaviour of the government of Iran.”

There it is– in all its righteous glory. Only problem is–Justin Trudeau will have “Nunavet.” No matter what occurs, Mr. Trudeau is incapable of saying one negative sentence regarding any aspect of Islamic doctrine, ideology or behaviour.

This is your prime minister, fellow Canadian patriots. What CBC, CTV and the rest deliver is pure distortion. “It’s Trump’s fault,” bellow the Globe & Mail. “We really don’t have the information necessary to draw a conclusion,” state the Toronto Star.

Enough! This death incident should be the very last straw for King Justin and his Sunny Gang of Liberal cultural assassins. Yet, there he is, still in office.

That’s the thing a about parasitic liberal globalist leaders. Once planted in office, they cling and cling ,and never let go. Take Angela Merkel— her and her pleated skirts are still in office in Germany. Trudeau “boyfriend” Emmanuel Macron? Him and his $5000.00 suits are still in charge--despite Yellow Vests and endless riots in the streets.

And of course, Justin Trudeau of Canada– globalist “cling-on” of the century.

All buried by media, all trouble-makers for the nations. These people have worked dilligently to trans-sition their nations away from their “native” cultures, and toward a borderless nation-state the Trudeau Dynasty prefer for the destiny of Canada.