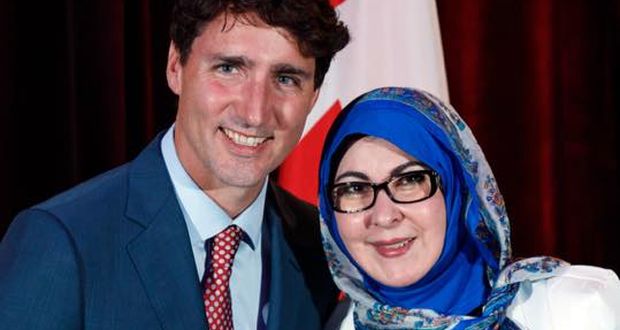 “Canada  will increase its spending to 1.4 billion Canadian dollars by 2023 from C$1.1 billion currently, he announced at the world’s largest conference on gender equality, We Deliver, positioning his country as a leading donor internationally.”

The post-modern nation state of Canada as decried by PM Justin Trudeau is a curious state-of-affairs. In what was once a nation which focused on improving the lives and welfare of the Canadian people, our ruling prime minister manages our country in a unique fashion.

Within Trudeau’s post-democratic Canada, a bizarre social trans-formation has taken place. It goes something like this:

Priority Entities For Our Liberal Government:

Irrelevant Entities For Our Liberal Government:

There it is–simple as pie. A complete societal dichotomy within Trudeau’s “No Core Identity” Canada. In this regard, we can find a quintessential microcosm within the following dynamic:

The 2019 child-poverty rate in Canada was little changed at 8.2 per cent. Still, the agency said 566,000 children are today living in poverty in Canada.

While overall rates have receded in recent years, child poverty has not–-much of this due to the pollution and disease affecting Canada’s First Nations communities.

Now, we contrast this with the following: “Former Liberal leader Bob Rae was just been named Canada’s special envoy for humanitarian and refugee issues.”

Prime Minister Justin Trudeau says he is appointing Rae to the new role to continue the work he started as the special envoy to Myanmar two years ago.

“Mr. Rae, a former NDP cabinet member,  spent seven months in 2017 and 2018 assessing what drove upwards of 600,000 Rohingya out of their homes in Myanmar and into neighbouring Bangladesh, creating a humanitarian crisis.”

Interesting eh? No doubt CAP followers can see where we are going with this. Being reasonably objective, it is not as though previous federal governments have not thrown giant dollars at these types of international causes.

Yet, there is something entirely unique about the situation with Mr. Trudeau as national leader. Utilizing this microcosm, we find that in terms of priorities, our ruling government perpetually side with non-Canadian social issues before they address domestic social issues.

Try $5 Billion Dollars as a minimum, and then add the billions our government has committed to African and Middle Eastern nations in the coming decades.

Did you know? PM Trudeau not only gave the funds to these anti-democratic dictatorships, he actually increased the funding by a huge amount.

Canada  will increase its spending to 1.4 billion Canadian dollars by 2023 from C$1.1 billion currently, he announced at the world’s largest conference on gender equality, We Deliver, positioning his country as a leading donor internationally.

Okay, so let’s get this straight. A cool half million Canadian children are currently living below the poverty line. The Canadian Constitution says that the top priority of government must be the health, welfare and economic status of 37.7 Canadian citizens.

Some facts, as obscured by CBC and establishment Canadian media:

Canada has the highest per-capita immigration intake quotas on planet earth. In 2019, Canada was the number one refugee-accommodating nation on earth. By way of our nation’s generous “Welfare State,” the Trudeau government are shipping more tax money than ever before in history to hundreds of thousands of 3rd World migrants.

While pulling funding from Christian Bible Camps in Canada, Justin Trudeau has sent tens of millions to “multicultural” organizations with alleged connection to militant Islamic organizations.

Then, to top it all off, experts inform us that the billions do not actually reach the intended poor of these nations.

“Canada is foolish to think their money isn’t being diverted. The entire country relies on bribery, so any progress reports you get, unless from SIGAR (who I know) are suspect. Don’t rely on World Bank or others. They wink and avoid finding the real truth.”

Getting the picture, folks? CAP sure as hell is. Meanwhile, in the middle of all this tax money malarky, 560,000 Canadian children are living in poverty. First Nations reserves are permeated with poisoned drinking and bathing water.

All which brings up an astute question– one that CBC has never once entertained:

Who is Justin Trudeau really working for? From a purely economic standpoint, the dollars and cents tell the story. The PM of Canada works for the 3rd World, Sikhism, Islam, China, Iran, Saudi Arabia and the United Nations.

But not for Canada–at least not in the “traditional sense” of our nation. What King Justin is doing is not so much “managing” our nation as it is transforming our country.

CAP Opinion: Democracy in Canada is dead– but our citizenship doesn’t know it yet. All this throwing of billions at the 3rd World is for the purpose of transitioning the dying Great White North from a western democracy to a 3rd World-dominated socialist dictatorship.

CBC, CTV, Globe & Mail and the rest are controlled by the Trudeau government in a similar capacity to the manner in which the government of China control their domestic media.

In its place, a brand new Canada is being ushered in. This Canada is a socialist nation with a pseudo-dictatorship controlling all aspects of society. Mass 3rd World immigration and refugee intake is a political weapon for the Liberals to control every riding in Canada.

Once Justin and Somalian Refugee MP Ahmed Hussen accomplish this, there will be no point in holding federal elections. Therefore, our dying nation morphs into a Liberal-Third World dictatorship.

This global nation-state will be 100% anti-Christian, and 100% pro-Islam. Freedom of speech will become yesterday’s new as Trudeau & Co. bury democracy for all-time.

And what, pray-tell, will transpire within our Anglophone communities? Try being railroaded into a demonized minority community.

This ominous, catastrophic attack against our people and nationhood is proceeding as planned, as CBC and establishment media cover-up every idea expressed within this article.