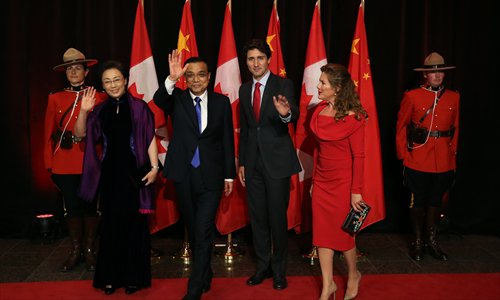 Pierre Trudeau first travelled to China in 1949 when it was in the grip of revolution. He returned in 1960, after which he and friend Jacques Hebert wrote their book, Two Innocents in Red China.

When Trudeau succeeded Lester Pearson as prime minister in 1968, his platform included diplomatic recognition of the Peoples’ Republic of China.

Canada-China relations enjoyed steady growth in the ensuing years, interrupted briefly in 1989-90 by the events in Tiananmen Square.

Generally, the Conservative Party showed little interest in developing Canada’s relations with China and gave the relationship little priority. In other words, Canada-China diplomatic and economic relations remained an exclusive domain of the Liberal Party of Canada.

Enter Justin Trudeau in 2015. Relations with China were not a significant part of Trudeau’s campaign. For that matter, neither was freshly-minted PM’s fervent dedication to the United Nations, Saudi Arabia, Iran and African nations.

At the G20 Summit in Turkey in 2016, Justin Trudeau met with current Chinese President Xi Jinping. Reaching back to the legacy of Trudeau’s father Pierre, Xi is reported to have commented that Trudeau père had “extraordinary political vision” that China would always remember.

Indeed, they remembered it well. Pierre Trudeau opened the door for China’s economic entrenchment within the Canadian economy, to be exacerbated by Justin Trudeau through such as examples as an attempt at a Canada-China Free Trade Agreement in 2017.

With a new prime minister in Ottawa in 2015, experienced policy experts saw an opportunity to redirect the future of Canada’s relations with China.

Professors Paul Evans at UBC and Wendy Dobson at the University of Toronto have called for “a new approach to China“ that would build on the complementarity of the Chinese and Canadian economies, while supporting “Canadian”– i.e. democratic values.

A quick look at the those “values” speaks volumes:

The Chinese government has detained more than a million Muslims in reeducation camps. Most of the people who have been arbitrarily detained are Uighur, an ethnic group primarily located in China’s northwestern region of Xinjiang.

Justin Trudeau–self-professed, media-endorsed human rights advocate– has offered only the most tepid of condemnations, and did not do so until the situation became a critical topic on the international stage.

PM Trudeau has instituted extensive carbon taxation in Canada. The Canadian federal government recently announced that the carbon tax will increase from its current $30 per tonne of greenhouse gas (GHG) emissions to $170 per tonne in 2030 – an increase of 566% over 10 years.

Moving toward recent times, there is, of course, the scourge of the Covid19 pandemic. The source has been exposed by myriad media and health sources as the Wuhan province in China.

Justin Trudeau says Canada is not drawing “firm conclusions” on allegations that the coronavirus — which has now caused devastation worldwide — came from a lab in the Chinese city of Wuhan.

Moving to the present-day– as in, this week in Canadian politics, we discover the following two developments:

In a startling, but unconfirmed, report from Canada’s alt-media outlet Rebel News, an accusation has emerged which accuses Prime Minister Justin Trudeau of collusion in an attempt to hide the origins of the world-wide pandemic debacle.

“Rebel News has accused Canadian Prime Minister Justin Trudeau of helping China to hide the origins of the deadly Wuhan Coronavirus that put the whole world to a halt last year.”

“The central banks of China and Canada have renewed a bilateral currency swap agreement, the People’s Bank of China has announced.

“The swap line has a size of 200 billion yuan (about 30.96 billion U.S. dollars), or 39.39 billion Canadian dollars. It will be valid for a five-year period and can be extended on mutual consent.”

Neither of the above incidents have been reported by the CBC, or any other Canadian media outlet. Citizens may wonder how many other hidden scenarios have been lurking behind-the-scenes since Pierre Trudeau first shook hands with Mao Tse Tung in the year 1971.

They are many–in fact, dozens upon dozens. Is there truth in the theory that the Liberal Party–never more so than when a Trudeau is prime minister– is in reality a long term partner of the communist government of China?