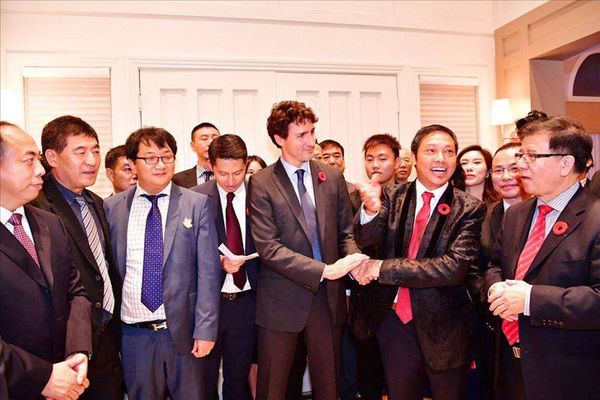 According to an article from the National Post, foreign donations to the Pierre Trudeau Foundation began to skyrocket after Justin Trudeau was elected prime minister in 2015.

Between 2014 and 2016, donations from non-Canadian sources increased from $53 million to $535 million– an increase of one thousand percent.

The Conservatives requested that the Lobbying Commissioner investigate if Liberal fundraisers had used donations to the Trudeau Foundation to gain government influence. The Canadian Lobbying Act says financial donors are prohibited from lobbying a federal government.

This is no minor incident. Canada greatest unsolved murder case(five years, no leads), the deaths of Barry and Honey Sherman, have been associated with Trudeau government lobbying. At the time of the deaths, Sherman was being investigated by the Federal Government Lobbying Commission.

“Sherman and Apotex faced a possible five-year ban on lobbying the government  if it could be proven that he ran afoul of rules that prohibit registered lobbyists from lobbying office holders they helped get elected.”

The Open and Accountable Government guide, codified after Justin Trudeau became prime minister in 2015, specifies that when fundraising or dealing with lobbyists, Ministers and Parliamentary Secretaries must avoid conflict of interest that have potential to involve conflicts of interest.

An analysis done by the National Post confirms that one in six donors have affiliations with organizations currently lobbying the Feds. Donations from international sources increased ten-fold once Justin Trudeau became prime minister. Conservatives called for an investigation into conflict of interest regarding foreign donations totalling over half a billion dollars.

Net result? Not a darn thing. Upon deeper analysis, we discover details on the “international” donations. The bulk of them appear to come from China.

In 2016, the Globe and Mail reported on a fundraiser at the Toronto home of a Chinese-Canadian business executive. One of the guests was a wealthy donor seeking Ottawa’s approval to begin operating a new bank aimed at Canada’s Chinese community.

“Trudeau was the top draw at the $1,500-a-ticket Liberal Party event, attended by insurance tycoon Shenglin Xian, the founder of Wealth One Bank of Canada and president of Toronto-based Shenglin Financial Group Inc.”

Among the donors was Zhang Bin, a wealthy Chinese businessman and political advisor to the Chinese government in Beijing. The newspaper said Zhang, along with a partner, donated $1 million to the Pierre Trudeau Foundation.

What to conclude? How about the idea that the Liberal Party and the Trudeau Foundation pulled the whole thing off without picking up a blemish. The intimate relationship between the Liberal Party of Canada and the government of China is something all Canadians should be aware of.

This is the way the Liberal Party of Canada roll. Belief in “protectionism” is non-existent. Our borders have been rendered porous. Illegal refugee intake is good-to-go. National sovereignty? Forget about it. Patriotism? You must be absurd.

To use a high-tech metaphor, Justin Trudeau is running what one would call an “open source” government. Not only do the Liberals invite foreign citizens to Canada– they invite foreign governments as well.

What exactly is their end-game in all of this?